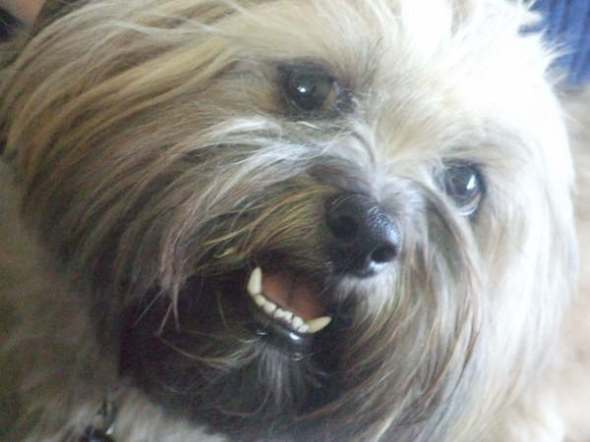 June 16, 2009 – One Year Old!  Kipu sends Birthday Greetings to siblings Akasa, Karma and Skyob!  Kipu hopes his sister and brothers are doing as well as he is.

He loves going on his walks…in fact…if I even mention the word ‘walk’ he runs over to the front door and has an excited look of expectation on his face.  (And he has many wonderful expressions…you know exactly what he’s thinking.)  On his walks he loves everyone he meets so I’ve broadened the number of people I know.  He’ll wag his tail and continue to look over his shoulder till he can’t see them anymore.

He has turned into a bird dog, too.  That means he doesn’t like any birds in his yard.  That makes things a little difficult for me as I have several bird feeders.  He’ll be laying by the patio door looking out, a rabbit shows up and Kipu’s up growling and barking.  If he happens to be outside when the bunny appears, the bunny has to run for his life!  Talk about fast!  Kipu can catch the ball I throw before it goes downstairs.  Granted, it’s just his squeaky, stuffed soccer ball, but still it amazes me!

I love when he talks to me.  I can’t interrupt what he’s saying, but it’s a really cool sound he makes.  The closest thing I can think of to compare it to is a cooing dove.

And he’s definitely a helper with my gardening.  I’ve had to fence my veggie garden to try to keep him out after he walked down my row of poblano peppers and tipped them all over and then tried to go through the climbing pea fence I had made with twine.

He’s also my protector.  When a dog on TV barks, he stands up on alert and begins growling.  Or a doorbell on TV rings, he’s immediately standing and barking, glancing over his shoulder to check to see if I’m heeding his warning.

I woke in the wee small hours this morning to someone stroking my hair.  I discovered he gave a couple of licks to my hair while he decided to share my pillow.  His little butt was under the covers, too, so not sure how he managed all that.

I honestly couldn’t imagine what I’d do without him….