“… and so we sit here listening to the haunting strains of Legend of the White Stupa, paying homage to Sir Edmund.  Like the mountain mists, he has passed from our sight.  And it is with heartsore realization we see the mists swirling around the Gompas.  Will they too fade, only a heartbeat on the icy winds … symbols of a time and place lost in antiquity?
Vickie – January 10, 2008

The Lhasa Apso joined the ranks of the Tibetan Mastiff, Saluki and Basenji, with the general membership of the American Lhasa Apso Club’s approval to expand the gene pool outside the existing AKC registered dogs by incorporating region-of-origin dogs.  The approach was two-pronged:

Use of AKC FSS® to introduce region-of-origin stock.
Open the AKC Studbook to include Gompa dogs from the Gompa Lhasa Apso Preservation Program.

In August 2011 seventeen Gompa dogs, including their extended pedigrees, entered the AKC studbook. Within The Gompa dog section of this website you’ll find details on those dogs, from their ancestors to their descendants. 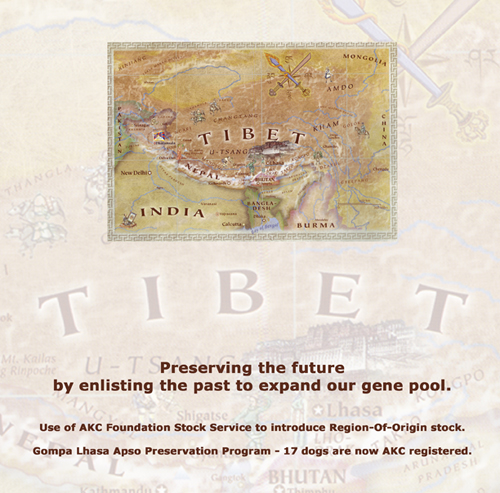 This documentary was produced by Debby Rothman to educate ALAC’s general membership prior to the vote in 2011. Ancient Treasure The Remake chronicles the history of this particular lineage descended from Lama Gyen Yeshe’s Apsos.