“Somewhere along the way we discover
the journey is more significant than the destination.
And that the people we meet along the way
will be the traveling companions of our memories forever.”
From “Up Country” by Nelson De Mille 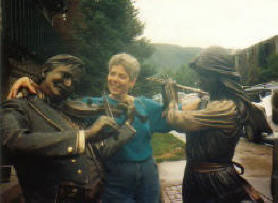 Debby, Julie and Kaylee all became Register of Merit Breeders, a distinction awarded by the American Lhasa Apso Club, as well as American Kennel Club Breeders of Merit.

FFT evolved and revolved around friendships. In 1979 Mary Schroeder and I founded Fleetfire Lhasa Apsos. The name came from an apricot poodle owned by Mary; Andiallen’s Fleetfire. I liked the name. It fit the pretty red-gold Apsos acquired from Jeri Berman Schwartz, via Max Kerfoot. Mary bowed out of the Lhasa Apso breeding program when she started a judging career in the early 1990s.

Julie and I met in 1984. A year later our friendship was sealed with a shared bottle of wine in Sioux City, Iowa. Our friendship strengthened with each passing year…belief in upcoming puppies, exciting wins, fun times, trials, tribulations and more bottles of wine. Friendship inspired us to persevere, each offering encouragement when the other needed it, each being able to share with the other.

While we’d bred dogs for years under both our original kennel names – Fleetfire and Timbers’ – and later the combined Fleetfire Timbers’, we got tired of not using really cool names due to the length of our kennel names. In 1999 we started using FFT, representing the fusion of our lineage that was present from the beginning.

Kaylee started helping Julie with the dogs when she was three years old. That’s right! Three years old. In 2007 she met the American Lhasa Apso Club’s requirements and became the youngest Register of Merit Breeder in ALAC’s history.