Yesterday Sarah and Bryan brought Vivian up for grooming. Vivian is a littermate to Ian, C’est La Vie, Camron and Tambo. That was an excellent litter. Julie kept a male and a female. I kept a male and a female. Vivian, in sync with her littermates, is officially FFT Vis-a-vis. When her permanent bite came in, it was apparent she was more undershot that preferred. With 3 siblings to go forward, I placed Vivian with Sarah. What a joy that has been in my life. Sarah and I became friends. I love that I have a friend that’s 32.

On New Year’s Eve, Sarah’s dad preformed the ceremony for her wedding to Bryan. They seem a perfect match. Bryan sometimes accompanies Sarah when she brings Vivian up for grooming. We talk podcasts, politics and lots of other stuff. Bryan is the person that brought Web 2.0 to light for me. Being an IT guy for CU Boulder, he truly understands computers inside out. He understands all the silly lingo. Twitter. Tweet. I really do like having young friends.

The coolest thing happened the week I groomed Vivian in January. Sarah sent an email wanting to talk with me about getting a puppy. Bryan wanted a male and had already named him Vincent. Vincent! There’s history behind that name. Vincent! Viv’s dam is Victoria. Her siblings were Victor and Vincent. Both met untimely, unfortunate deaths. In fact it was Vincent’s death that nearly did me in. That’s another story for another day… Anna’s puppies were born that very week Sarah sent her email. Anna and Vivian are both daughters of Victoria. Anna whelped one male puppy. Sarah and Bryan’s Vincent had arrived. Yesterday they met for the first time. 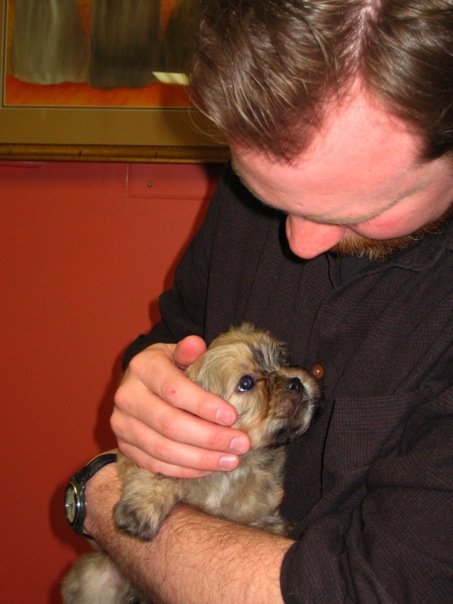 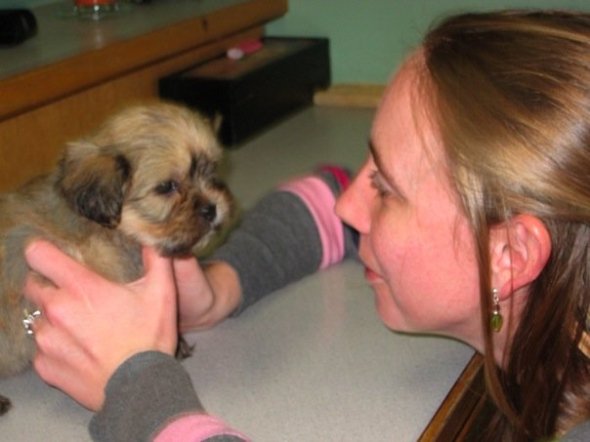