A few days ago, Faye sent photos of her latest litter, asking what priorities to place on puppies at this age. 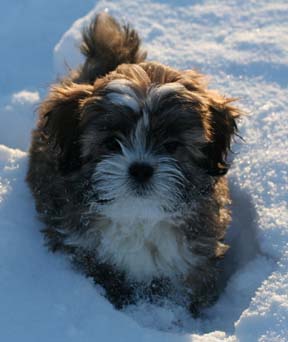 Here’s the link to more photos and the pedigree.

I note the movement on each puppy, including carriage, confidence and attitude. It’s hard to put into words what I look at. It’s the entire picture, the entire dog, based on my own knowledge of anatomy and the breed. I note the parts, how the parts fit together and how each puppy uses itself. I note the balance on each puppy, taking into consideration length of leg and length of body. I note rear angulation, particularly in the stifle. I don’t select on length of hock, but I do note it. Longer hocked puppies will move closer – wobblier possibly – going away than their shorter hocked siblings. This is important to remember as they grow. Rear angulation in our lineage is..well, it is. Our dogs usually have exceptionally nice rear angulation. It’s one of the things that give the FFT dogs ground-covering movement. I’m probably biased, but I do think, generally speaking our dogs’ rear assemblies propel them above many others. Pun intended. Rears with big angles and long bones need muscles, mature muscles, conditioned muscles for peak performance.

Those rears need a front assembly that can keep up the pace. Julie can comment better on what she actually looks at and feels for while the puppy is in a stack. I judge it all watching the puppy. I look for freedom in the forward reach of the front legs. Does that reach balance with the rear drive? I look to see how the front end is coming at me, mainly noting if the puppy is wide coming at you. You can see it all, if you’re patient, have a nice block of time for observation and a tasty beverage. Well, I mean you can see the balance if it’s there. If it’s not there you won’t see it. Unless you’ve had too many tasty beverages of the adult kind. My point is..you must catch the movement at some point during puppy play, between the wild dashing and leaping of exuberant puppies. You’re certainly not going to catch it if you put a lead on the puppy and try to gait it!

Prior to this age, from birth actually, I have been watching head type. As I look at the entire litter, I already know which head/s I prefer. I’ve found that heads – at least the heads I’m used to working with – rarely change. A pretty head remains a pretty head. And, if you’re lucky, there’s a pretty head on the most balanced puppy!

None of the above really answers your question about priorities. If I’ve done a particular breeding for a particular feature, then I will look for that feature and weigh it more heavily than usual when selecting my pick puppy. For example, if I bred my lovely, Shih-Tzu head-style dog to another lovely dog with an excellent typey head, if I did the breeding based on ‘head’ alone (and I have), I’d select a puppy with a longer, narrower head. Or if there’s a particular feature I’d rather move away from, again I will give more ‘weight’ to the puppy that doesn’t exhibit that feature. For example, if one parent were…missing an upper incisor…my selection could very well be influenced by which puppy had a complete set of upper incisors. It’s very possible the puppy I selected for such reasons wouldn’t be ‘pick of the litter’. But the weight of all factors, with a bit of extra weight on the wanted or unwanted feature, changes my choice for ‘pick of litter’. Again, it’s a balance thing.

A skilled breeder will balance the purpose of a particular breeding when evaluating a litter. The best overall puppy may not be the one the breeder will keep. If you’re lucky it is!

Now, if I were picking a Gompa puppy…forget all the above! I’ll take the one with a beating heart! 🙂