Of Triangles and Terriers 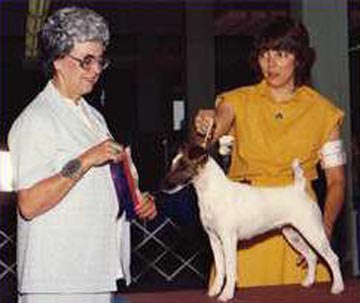 Once Upon A Dog is a feature inside the back cover of AKC Family Dog. From the March/April 2008 issue…

Francis Redmon’s “Totteridge” Smooth Fox Terriers were a famous British line of the late 19th century. Redmond was a master dog man who did much to standardize his breed, and the Totteridge kennel was pivotal in the creation of the modern Smooth Fox Terrier.

It was the custom to immortalize dogs of such renown on canvas. The plum job of preserving Redmon’s famed fox terriers for posterity fell to Arthur Wardle (1864 – 1949), a self-taught animal portraitist who learned his trade during long hours of sketching at the London Zoo.

Wardle’s The Totteride XI is a masterly example of perspective painting. The artist creates the illusion of depth by leaving plenty of bright ground beneath the dogs and darkening his palette as he moves from foreground to background, with the sponge and basin in the near foreground completing the three-dimensional effect.

Warle’s great challenge was how to group the 11 terriers, an unusually large number of subjects for a commission of this kind. He arranged the dogs on two levels, six on the ground and five in the hay crib above. One dog stands a head taller than the others, serving as the apex of the triangular grouping.

Within the larger triangle, the dogs’ heads are arranged to form smaller triangular patterns. These are set off by the rectangular planes of the background and floor, with one perfectly placed vertical beam breaking up the composition’s horizontal drift. Wardle, like many a great artist before and since, understood the visual power contained in the unreleased tension of triangles, especially when framed by static rectangles.

In The Totteridge XI, Wardle left us a historical record of one of dogdom’s most important lines. The canvas also serves as a visual encyclopedia of art technique, from which any young painter can learn.

Not bad for a guy who never took a lesson.