Katy did a painting of Sadie Wonder yesterday… 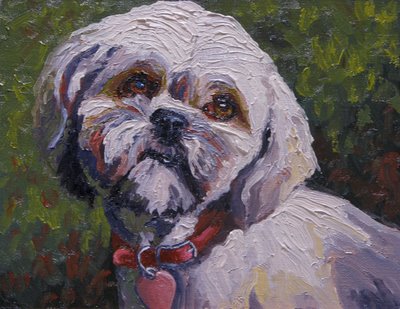 It’s always a treat to visit Katy’s blog. In an entry titled Leader of the Pack, she writes about this, as she says ‘juicy’, painting of Sadie. If you haven’t been, treat yourself and take a little trip to Katy’s.  Her words are nearly as eloquent as her art.

Then take another trip to Zeke the Apso, a page Katy and Ken dedicate to

“Promoting the Physical and Spiritual Welfare of our beloved and fellow created beings.”

Scroll down to The Zeke and Sadie Showon the left hand side of the page and watch three Apsos make their bed. Too funny! This morning I watched all the videos, including a couple I hadn’t seen. I especially like Zooming to Stevie Ray. It’s always fun to watch Apsos zoom. Stevie Ray Vaughn was a nice touch!

Katy writes about Sadie, leader of their pack, describing her as a benevolent leader. I love that! ‘Alpha’ so often is used as a negative and that’s a huge mistake. My experience with the many canine alphas I’ve had the privilege of knowing is calm, wise leadership, using status only when absolutely needed. When Drepung came, Ceese told me no one in Virginia bonded with him. I’m certain that was because he isn’t a cuddly, affectionate dog. I was immediately drawn to his sense of self, his quiet leadership, his machismo. From the time he came to me, including the car ride from Virginia to Colorado, he has physically positioned himself to watch over the pack. In Ceese’s Volvo, he chose to ride on the console between the two front buckets seats, looking out the front window. Here, outside, he positions himself in the highest corner of the outside yard, sitting like the noble Apso he is. It’s a quite a contrast to compare his personality to Sadie Sweet Sadie. Yet, both leaders, benevolent leaders.