:Beware of this ball..sent by Susan

Chai’s owner developed a blog to get the word out regarding this dangerous toy. Excerpted…

While chewing on the toy, a vacuum was created and it effectively sucked his tongue into the hole in the ball. From speaking with my vet, this likely occurred because there is not a second hole in the ball preventing the vacuum effect from happening. I became aware of this when Chai approached a friend at my home whimpering with the ball in his mouth. She tried unsuccessfully to remove the ball but the tongue had swollen and could not be released. 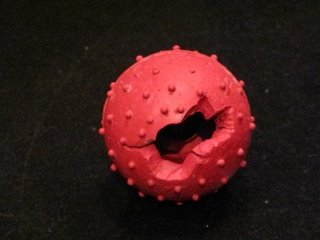