← :Miss…are those puppies free?
:Tote bag on a Wednesday morning →

Asteya. A yogic principle shared by Athena last night during yoga class. Athena is my friend, first and foremost. I met her years and years ago, back when Mountain Pet Grooming was still in the yellow house. She is the reason I can still groom. All those years ago, she opened my mind, showing me the possibilities of….ummm…body awareness.

So, here’s the sequence of photos I mentioned sharing yesterday, if only I had enough time. 🙂 Magoo is the Apso. He is blind. He was found wandering a country road outside of Pueblo, both eyes missing and turned over to ApsoRescueColorado. He remained with Vickie until he was placed in his forever home. Prior to placement, Vickie wrote Lessons From A Blind Dog which was published in her local newspaper. That piece touched hearts. One thing led to the next. Magoo found a home.

His confidence, self-assurance was evident as he approached our gathering Saturday. He walked in front of his owner. Look at him approach Christi.. 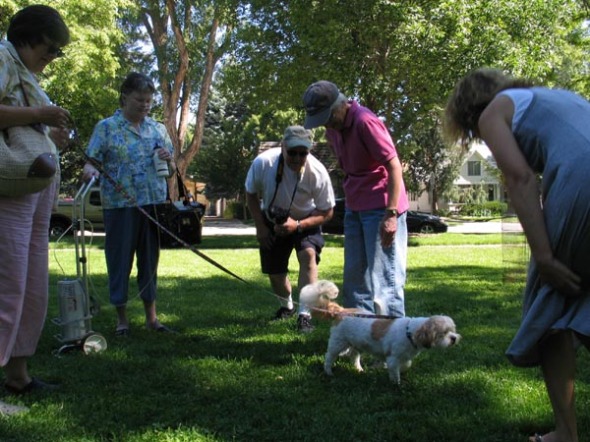 ..accepting a scratch on his cheek. 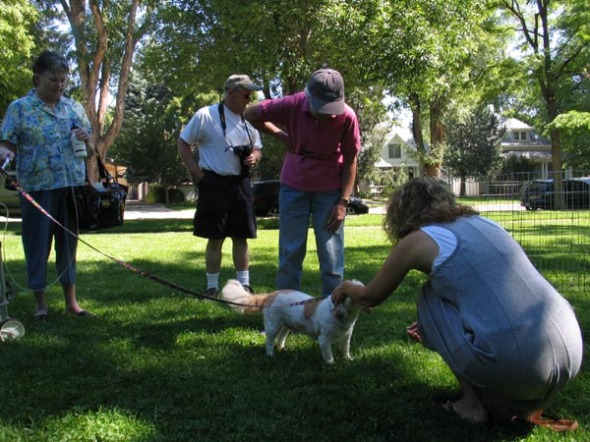 Just a point of canine body language. Notice his head and Christi’s hand in the above photo. He is ‘up’ in posture, enjoying her touch. In the photo below, her hand has moved to the top of his neck. He has moved his head downward, in a gesture of slight avoidance. 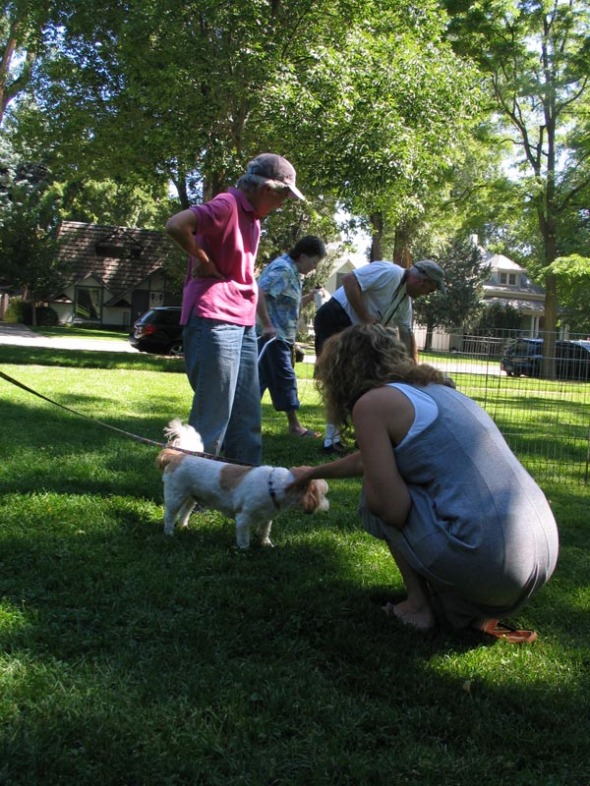 I hadn’t realized this body language until just now, but what the heck. I have time!! to comment. Dogs prefer to be petted from underneath. There’s an interesting series of photos in Pat McConnell’s The Other End of the Leash. All photos are taken from behind. The first photo shows a couple of chimpanzees, sitting side by side, expressing affection with an arm around each other. The second photo is the same, only the species changed to human beings. The third photo shows a young man and his dog, with the young man’s arm around the dog, over the dog’s back. The creatures in the top two photos are obviously at ease with the gesture. The dog, however, is obviously not comfortable with the gesture. To a dog, a front leg over another’s shoulder is a display of social status. I see the gesture between my dogs, always meant to remind the ‘lesser’ dog exactly where s/he stands. It’s not a mean gesture, it’s simply a reminder. Sorta like when I used to give Nate the ol’ “mom’s eye”…..watch it!!