I just have to share! Nate has coached the University of Colorado’s club swim team for the past two years. Nationals – the culmination of the American Swimming Association – University season – were held last weekend in North Carolina. The association is comprised of student-run swim clubs from colleges and universities across the country, founded in response to the elimination of collegiate varsity swim teams.

From the website: The 4th Annual American Swimming Association University League Nationals Championships proved to be a powerful display of the growth and rising level of competition of collegiate club swimming this weekend, where only 14 of 50 ASA U. COLLEGIATE CLUB SWIMMING RECORDS were able to withstand the onslaught of record-breaking swims at UNC-Chapel Hill’s Koury Natatorium.

Colorado dominated the meet, winning the men’s, women’s, and overall team competitions and sweeping all four relay events in record time.  Rounding out the top three in the team competitions were UNC-Chapel Hill and Penn State with second and third place respective finishes in all three divisions. Eighteen clubs and 310 swimmers participated in all, making this year’s ASA U Nationals the largest and most competitive ever.

Nate was really, really proud of his team and swimmers. He told me they worked hard in practice and the many, many personal bests are evidence of their hard work. Here’s the team…that’s Nate in the white dress shirt and tie on the left. 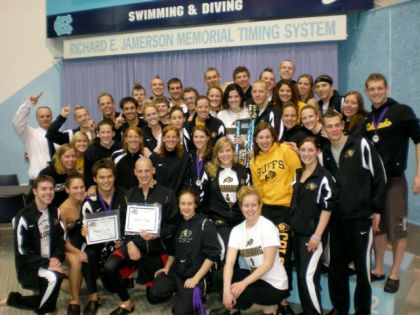 Here’s what The Campus Press had to say… including some quotes from Nate.

Here’s a youtube video about the team, including a brief interview with Nate.