Toshimi sent me a note. Yesterday, the 19th was the anniversary of Koyuki becoming part of Toshimi and Tet’s family. She posted about it on her blog, including several photos of a very young Koyuki. Her blog is in Japanese. The characters, the letters that comprise the language are beautiful. There’s a link to Toshimi’s blog in the left hand column. Visit her FFT composite/collage page.

There’s something I’ve just become aware of called RSS feed. My web site skills, my blog skills are basically self-taught, so it could take some time for me to figure RSS feed out. When I do, this blog will alert viewers when Toshimi or Katy or whoever/whatever updates their page. Nate has a facebook page, which is one reason I decided to learn how to blog. I remember the day he and Rick brought Queen Mary III home. Within 10 minutes, he’d taken photos of her perched cattywompus (that’s one benefit to vehicles designed to crawl over rocks in the back country) and uploaded them onto his facebook page. That’s all it took for him to share Queen Mary III with his friends. Wait a minute! Show me how you did that! Just last week I asked him for another tour of facebook, noting the many features, how he and his friends used them.

Jason Steinle, a gifted healer, is my young, bright, handsome chiropractor. That, in and of itself, has been a welcome addition to my life, giving these sometimes-weary bones a new lease on life. Gotta keep brushin’ those dogs! The icing on that cake is Jason’s technical knowledge. He maintains a couple of websites, a blog or two, has done radio and television interviews and is now venturing into interviews for the internet. Additionally, he’s a self-published writer. A great resource, he originally gave me the information on this blog’s host WordPress, explained the many benefits – search capabilities, categorizing, archiving – of blogs. If I can’t figure out RSS feed and how to incorporate it into the blog, maybe I’ll book an extra chiropractic session, to be spent in front of the computer.

That slight diversion, that siding in rail speak, was simply to say one day, the blog – without my input – will let you know when Toshimi updates her blog. Maybe by Koyuki’s next anniversary??

Like a year ago when I met Julie to pick up Koyuki and Edie, along with Josh and Crystal for the Tomu handoff, yesterday I drove to Nebraska. This time is to meet my sisters for lunch. 🙂 Oh. And to return Ranpa.

About equal distance between my hometown, Norfolk, where my sisters remain, and my home in Colorado, we met in North Platte, Nebraska…which is where I met Rick 31 years ago, come to think of it. Arriving 20 minutes before me, Lori and Kelly scouted out downtown and found a Japanese restaurant named Tempura. We settled in for a couple hours of tea, food and laughter. It was really, really, really fun – just the three of us having lunch. I think we should do it more often! 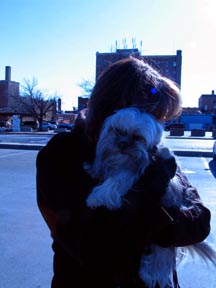 Sleek Sue and I took back roads back to Colorado, eventually joining I-76 in Brush. I love road trips and  back roads. As the years pass, I feel melancholy, driving through town after town, rural, dying. Family farms have been swallowed up by corporate farming. Footprints, if you know what to look for, are there. A shelter belt in two rows, forming an L. The skeletal remains of a last barn. I love barns, small quaint towns, church steeples rising above the hills and prairie, beautiful farms. the country. Now I sense ghost country, the Death Of An Era.

In the January 2008 issue of National Geographic, The Emptied Prairie gave me a better understanding of the brief, really, history of farming the prairie. If you’re so inclined, be sure to check out the Photogallery link on the upper left hand side of that page. The hauntingly beautiful images are by Eugene Richards.

Hey! Note RSS feed at the bottom of that site!