In the spring of 2001 I became aware the lineage of dogs tracing recent roots to Nepal, having been bred by Lama Gyen Yeshe, had crossed yet another border and were now in the United States. Interested in the group since arrival into the Western Hemisphere in the mid-eighties, I finally made my interest known. One thing led to another and on August 31, 2001 a group of ten Gompa dogs – six females and four males – arrived at their destination in the Rocky Mountains of Colorado.

Only a few people knew of their arrival and at my request, they remained silent about the dogs’ arrival. Over a year later, the subject of the Gompa dogs came up on Dr. Catherine Marley’s apsolist.

The discussion was about the outcome  of the Gompa dogs.  Sue Hild’s eloquent post on the subject ended, “Basically Gerald did the hard part, getting the dogs here.  It is unfortunate that no one was there to pick up the torch after Mr. D’Aoust had run his length of the relay.”

It was time for me to speak out, so I posted the following on the apsolist:

The time has come…..

With a slight lag in the relay, I did pick up the torch.  For those of you on the apsolist last spring, you may recall the dogs alleged dire straights coming to our attention.  I was haunted by the fact the dogs hadn’t received respect or recognition by most breeders and fanciers since their recent predecessors entered the western hemisphere.  Realizing the dogs would never receive this if appropriate action wasn’t taken, I picked up the torch.

This announcement was scheduled to be made in September, 2003 because there is still much work to be done, following my carefully developed plan.  The dogs arrived at my house clipped short, which is one of the main reasons I have remained quiet. I wanted to present the dogs to you, Lhasa Apso fanciers, in full coat, groomed to our standards.  For the time being I will share a photograph of Nyalu’s headpiece taken two days after the dogs’ arrival. 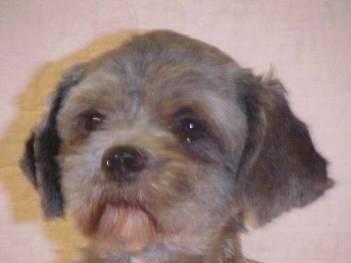 Mr. D’Aoust, Madame de Zarobe and Cecile Clover are directly responsible for this wonderful opportunity. Ten dogs were placed with me in August 2001.  A litter, consisting of a female and two males, was born here June 2, 2002. Not only were these dogs given to me, but Ceese and her Mac drove the dogs to Colorado!

Dharmapala was Mr. D’Aoust’s kennel name.  Kunza, Tibetan for fire, deity of fire and poet is the kennel name I’ve chosen for this breeding program.  Lotus is the kennel name of Mrs. Clover, the woman in charge of the dogs in Virginia.  The eight remaining dogs (out of the 18 last spring) in Virginia have been placed in the Kennel Without Walls.

My announcement was met with great interest and overwhelming support, including the following greeting:

And some will be forever grateful,

That a few had a clear vision of what lies ahead

For our beloved breed without the infusion of new blood, new genes.

What was once lost and is now “found”…

Shall it be squandered again?

for tonight, on this Hallowed Eve,

As the snow falls deep and silent in the Rockies,

There are ten Apsos that carry the very heart of the breed. 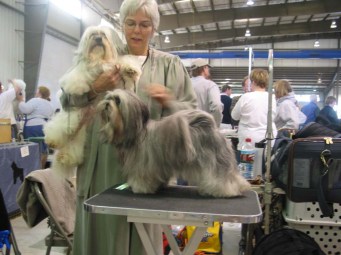 My original purpose was to continue the Gompa lineage as it was gifted to me; secondly to achieve the ability for other breeders to introduce this valuable genetic pool to their lineages for the health and welfare of the Lhasa Apso. That purpose and the approach evolved with the formation of the Gompa Lhasa Apso Preservation Program in the summer of 2004. The Program’s stated mission to preserve the genetic lineage of the Gompa Lhasa Apso is aligned with my original purpose. One of the program’s stated objectives to maintain a database that meets the American Kennel Club requirements for a domestic registry aligned with my second original purpose.