Myth, and both of the puppies’ grandmothers – Ella and Josie – will be competing at the AKC Agility Invitational in December. These talented ladies are ranked in the Top Five Lhasa Apsos with Josie #1 and as of the invite date Myth and Ella were #3 and #4. I have no claim to this fame other than DNA. 🙂 What Melissa has achieved with her Agile Apsos continues to inspire along my own Quiet Path of obsession. Little did I know where a 2009 challenge would lead me!

That year Julie and I challenged each other to take one of our retired dogs and ‘put a title on the other end’. Championship and Grand Championship titles are placed before the dog’s AKC registered name. Most other titles are placed at the end of the name. Ergo, a ‘title on the other end’. A title at both ends is a validation the dog is a good representative of breed type and has brains to go along with beauty. Since that challenge we have both put performance titles on several of the FFT Lhasa Apsos, continue to attend weekly agility classes and trial now and then, but neither of us come close to what Melissa has achieved.

In addition to Champion and Grand Champion, both Myth and Josie wear a performance title at the beginning of their name. MACH – Master Agility Champion. A Champion and Grand Champion herself, Ella has started to rack up QQs on the MACH quest. I am betting there is no other breed where the Top Five agility dogs are also Grand Champions. Like I said I have no claim to that fame other than DNA, but for this little while I’m going to bask in DNA glory.  Orlando here we come! 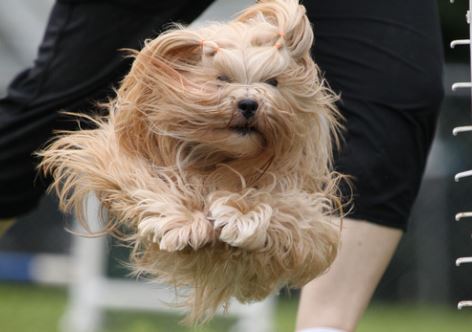