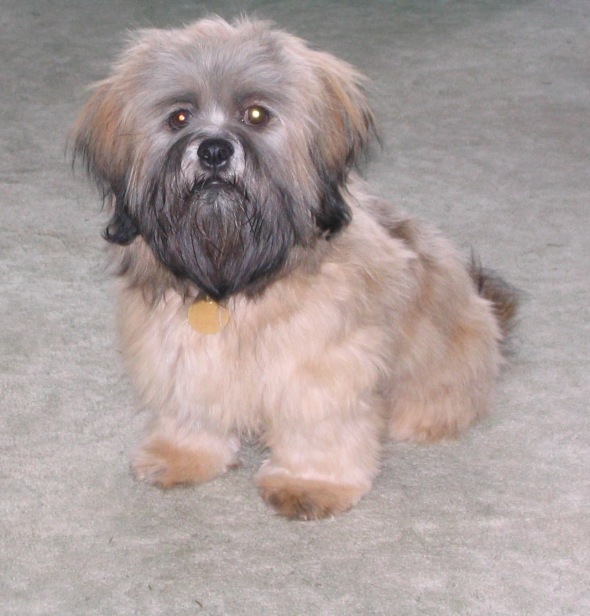 Kipu is a beautiful, loving little guy!  I am so fortunate to have him.  We have a morning ritual of cuddling on my lap over my second cup of coffee.  I try to make time to play ball with him each day.  John plays with him with his little dogs.  You sent ‘Blue’ and my oldest daughter bought him ‘Hank’ for Christmas, the names complements of John.  And, yes, Kipu does know his toys by name.  He also has ‘Moosie’, ‘Bunny-rat’ and ‘Elephonsio’.  When he tells me he has to go outside, he’ll grab one of them on the way downstairs and take it as far as the door to outside where he gives it to me because I’ve told him the little beastie can’t take the cold like him.  Actually I’m afraid it would get lost outside with all the snow.

I still haven’t figured something out.  He had four presents (each was a new stuffed toy) under the Christmas tree and they were mixed in with all the other presents for children and grandchildren who would be joining us on Christmas morn.  On three separate occasions I had to take a present away from him…it was his own each time…and place it on the tree branches so he wouldn’t get it again.  If they had been edible treats I could understand he could smell them, but new stuffed toys?

We’ve endured a very traumatic experience…the neutering.  He definitely wasn’t a happy camper and it took him a couple of days before he ‘forgot’ and forgave our dastardly deed.  I think what upset him most was being in a strange place, strange noises, hurting, etc.  He must have thought we didn’t want him anymore.

Our instructions were to avoid stairs and rough-housing for three days.  The rough-housing wasn’t a problem…but, how do you stop an apso from zooming around the dining and living room, up on sofa, back down, etc, racing like a banshee?

The stairs were a different thing as we live in a split level with four levels.  I again put up the kiddy gates to keep him on the main level with me.  A little better than 24 hours later I gave up carrying him up and down stairs.  He twisted and squirmed so much I figured he would do more damage to his stitches than using the stairs by himself.  The first night home I clasped his leash to his collar and slept with the handle around my wrist as I didn’t want him to go down his stairs off the bed by himself.  I’m afraid neither one of us got much sleep.

He is a smart little guy, but he pushes.  Our patio door isn’t working right now because of the snow and ice so it means going down two flights, back up one flight to go out the back garage door.  He is to sit before I open the door.  I tell him ‘sit’.  No response.  Doesn’t even look at me…what? someone said something? So I start to bend down to have him sit and before I have a chance to touch him, he sits.  He knows the command, he’s just pushing.

John is amazed at how he loves our grandkids.  We have a 17 and 16 year old in one family, both are girls and both dote on him.  He actually prefers Keena so Johnnie gets a little peeved when he shows it.  The next family has girls of 12, 6½ and a 1½ year old.  The 12 year old “isn’t into dogs”.  The 6 year old has loved him since the beginning but think her mommy has maybe told her to leave Kipu alone due to Buster’s surly attitude.  The littlest has stopped being afraid and reaches out to touch him.  Again mommy interferes.

I’ve trimmed him a couple of times now and the picture I included is after his second trim.  Trimming the back and sides are fine.  The legs, feet, tummy and face are not.  It’s a fight from start to finish, but I always win so maybe one day he’ll realize that and cooperate.  I’m amazed at his coloring.  The red gold has paled except on his ears and tail.  What I find fascinating is his face.  After the original facial trim, which I kept putting off because of fear of doing a bad job, I discovered his face and head are silver!

He’s been scratching and John thinks he has dry skin.  What should I do to alleviate that?  I know he doesn’t have fleas!  Nor have I given him a bath other than rubbing baking soda on him and brushing it in so I know it’s not from shampoo, etc.

I loved the New Year’s Day picture.  I said to myself ‘there’s Kipu’s brother, there’s Kipu’s mommy, there’s Kipu’s sister, I don’t know who Garma is (I’ve since discovered its grandma) and there’s Ki…THERE’S KIPU!  Needless to say I copied it into Kipu’s puppy book on the computer and no, I’m not a scrapbooker.  I tend to be a little anal about some things I’m interested in.  I do a heck of a lot of reading, research, etc., and put it all together for to my own satisfaction.  Not sure who will ever even be interested in any of it.

I’ve actually already searched all over your site looking for the page for each dog.   I was afraid I may have missed it so am glad I haven’t, but that you will be doing it during the long, cold winter.  And if Colorado is anything like North Dakota we really are in for a long, cold winter!  Drifts in my backyard are as high as the neighbor’s 4’ chain link fence.  I’m having to shovel paths and areas for Kipu to do his duty.  I just finish shoveling a spot, turn to look for him and see he’s blazed a new trail and did his job there!  He looks like he’s doing the breast stroke because the snow is so deep but it doesn’t stop him from investigating.

It was fun seeing the pictures of Dawa and Margo.  I’m sorry one little one didn’t make it.  I’m assuming since the two surviving are females, you will be keeping them for breeding.  I’d love to see updates when they have their own pages.

I loved looking at the blessing of Kipu, Karma, etc.  It looks like a lovely area and blessings, of any kind, can only help.

He’s really something else when we go for our walks.  He finagles around till he gets the leash in his mouth and then he leads me!  I maybe shouldn’t let him do that but I figure as long as he heels (sorta…at least he stays on the left!).  I let him choose which direction to go and he’s funnier than heck!  He actually prances and his little butt swings back and forth with his tail curled up.  I’ve had several people stop me and chat about how cute he is and what is he, etc.

If anyone puts ice in their glasses he’s right there!  He loves ice so we always sort of accidentally drop a cube for him.  He talks to me.  My problem is understanding if he wants to play, cuddle on my lap or go outside.  And he sometimes asks to go out and all he does is eat chunks of snow.  Not appreciated by me who stands and shivers till I finally ask “Are you done?” to which he comes running.  Of course, he’s done!

Sorry it took so long for me to get back to you…it’s been a little hectic here, holidays, company and all.  And this time tomorrow I’m in ARIZONA!  I already miss Kipu and can’t imagine how lonely it’ll be here for him.  But I discovered yesterday he can hold off going to the bathroom for longer than I’d thought.  Each Tuesday my oldest daughter and I go shopping and to lunch.  Kipu had gone potty at 6:30 a.m. so knew he wouldn’t go again for a bit.  We headed out by 9 and had intended to stop at home prior to lunch and somehow we forgot.  Shopped in south Bismarck and headed to the north end for a couple more stores.  We agreed to meet John for lunch at a restaurant on the north.  On the way back south my daughter wanted to stop at yet another store and I remembered Kipu hadn’t been out for awhile so she hurried.  It was about 1:30 when we got home.  He hadn’t messed any where but he was really clingy the rest of the day.

Anyway, wanted to let you know he’s doing fine.  He’s all healed from his surgery and better yet, it hasn’t changed him…he’s still loving and lovable, playful and crazy…in fact, he’s just perfect!