← :No Woman cheese..
:Julie and Fernando…sent by Christi →

Ah! Friday morning. Nowhere to be until twelve o’clock noon. Ah! Day before yesterday, I realized it was exactly four weeks ago Tammy and I stuffed ourselves and four dogs into Sleek Sue and headed down the highway. It’s been whirlwind after whirlwind since…which is much better than hurricane after hurricane. Show photos have started to arrive in the mailbox, giving concrete evidence to the dogs’ accomplishments. Like new parents sharing baby photos, like friends showing home movies of their vacation…

Edie – now known as Ch. FFT Carpe Diem – ended her short show career spectacularly. Ians’ daughter, she always seemed a gift from Julie. I had no potential mate for Ian. Julie offered Tequila, took Ian to Minnesota for the breeding and raised the puppies. Tequila, also generous, delivered four – four!!! – female puppies. Carpe Diem!! Carpe Diem!! Last year Edie made her debut at the Specialties in MN. She was awarded Best Puppy in Specialty Show the first day and RWB to a major (won by Moonie) at the following Specialty by breeder/judge Jan Bruton. Two weeks later, exhibited at the LACCC Specialty show only (Zen was entered the following two days instead), she was awarded Best Puppy in Specialty Show, Winners Bitch and Best of Winners by breeder/judge Sherry Swanson. Shown next at LACCC’s designated Specialty in February, she was again awarded WB and BW.

Edie’s next shows were the shows we’ve attended this past month. The first night, judge Michael Dougherty, awarded her WB and BW over 33 class entries for her 3rd in a row Specialty Best of Winners..

Next day’s Specialty was judged by long-time judge, former breeder of Lhasa Apsos and author of Your Lhasa Apso, Dr. Robert Berndt. Dr. Berndt is noted for judging bites. He doesn’t tolerate scissor bites; he wants full dentition. I thought about not entering Edie because she has four lower incisors instead of six. But what the heck?! I’d driven all that way. She’d be groomed. Might as well toss another entry fee to the wind! Am I glad I did!!

As he awarded her the Open class, I realized there a chance she could finish her Championship that day. When Dr. Berndt handed me the Winners Bitch ribbon, he stated simply, “very nice.” What an honor!

Thateus has had an equally exciting whirlwind show career. At least this part of his career. He’s now officially Ch. FFT That’s What I Said, but he’s probably not done in the show ring. Heck, he doesn’t yet know how to stand totally still for examination. Thursday, under Michael Doughtery he was awarded Best Bred-By Exhibitor in Specialty show…

The following day he was awarded Best in Sweepstakes (competition for dogs 6 months to 18 months) in an entry of 18..

And on Sunday, judge Toddie Clark awarded Thateus his first major, 5-pts at that.. 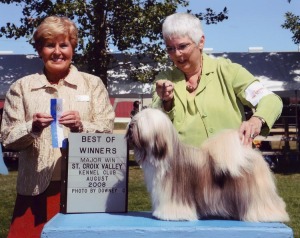 Don’t have the photos yet, but Fernando – Thateus’ uncle – was awarded Best of Breed under Toddie Clark, en-route to a Group 2.