← :Questions and the Travelin’ Man
:Miss…are those puppies free? →

The title of this entry comes from watching the first ever Saturday Night Live, aired in 1975…back when a smoke was a smoke and groovin’ was groovin’. The guest host was George Carlin. The powers-that-be at Saturday Night Live aired it last night as a tribute, a memorial to him. The format was interesting, particularly for a long-time SNL fan. The physical stage was almost theater in the round. Between each skit Carlin did a bit of stand-up. Some of it was sorta creepy in light of history, what’s taken place in our world since 1975. The Not Ready For Prime Time Players…wow! How fun it was to see them. Jane Curtin. Dan Akroyd. John Belushi. Gilda Radner. Loranne Newman. Garrett Morris. And, of course, Chevy Chase anchoring Weekend Update.

A few weeks ago I made a conscious decision to be home this summer. Kick back. Relax. Enjoy the blue skies, the fresh mountain breeze. This time of year is payback, spectacular payback for enduring the winter, along with mud season while the rest of you are enjoying spring.

Thursday afternoon Kathy and I shared tuna sandwiches and a wee bit of wine on the banks of Bear Creek. Literally on the bank. My grooming shop is located in a building that sits next to Bear Creek. We planned to sit at the picnic table by the creek, but found a woman with a group of kids having lunch and fishing. At least there were fishing poles and a tackle box next to the cooler. The kids were wading in the creek, which triggered Kathy’s memory about wading in creeks. Back when a smoke was a smoke… The table occupied, we settled in on a bench, poured a wee bit of wine and promptly were invaded by a swarm – literally hundreds – of small moths. After trying to ignore them for several minutes, certain they would take their swarm elsewhere, we retreated downstream. As we carried our lunch and wine past the young woman sitting at the picnic table, she said, “that’s the way to have a picnic lunch. I’m here with chai tea and four boys.” I told her she needed a glass of wine more than we did!

Friday afternoon I met Athena for a late lunch at the Creekside Cellars. We waited close to 45 minutes for a table by the creek. It was a spectacular day. The wait was well worth it. It doesn’t hurt that you’re able to take a glass of wine out front while waiting! They provide several tables, a bench or two on the shaded front patio where hanging baskets of flowers invite you to linger.

Saturday, while Ginny, Tammy and Vickie were at the Buckhorn Valley Kennel Club shows, I gardened, had lunch with Rick and Nate and a long phone conversation with Julie. It had been a while since we’d had time for lesurely talk. I’m not big on phone calls. It’s hard to find time, quiet time, enough to enjoy a phone call. It’s next to impossible at the shop with the noise, the business, the constant ‘deadlines’. My car is a place of solitude, nevermind lack of good cell-phone reception and not being able to walk and chew gun at the same time. By the time evening rolls around, this Early Morning Girl is brain-dead; the last thing I want is to talk on the phone. Julie and I talked over coffee. It was morning, after all. By the time we ended, we could have opened that long-distance bottle of wine and toasted. After all, It’s Five O’clock Somewhere!

Rose surely knows this and may marvel in my naivity, but New York state has five wine regions. Thursday, Kathy shared a booklet titled Uncork New York! A long-time friend Kathy met while teaching lives in the middle of the Finger Lakes area, one of the wine regions. With all mention of wine on the blog (wonder what happens if you do a search on ‘wine’ within this blog!!), Kathy wondered if we drink anything else. Sure! T and Ts, a favorite of mine. I corrupted Vickie after introducing her to T & T with lemon rather than lime. Ginny’s favorite cocktail is a Long Island ice tea. The thing about wine…it’s tasty. It’s easy to transport and serve when we all get together. It’s fun to learn about. The labels can be fun. It’s fun to share. It’s become a tradition.

Saturday, Vickie’s Dante (BISS Ch. FFT Kisses of Fire)  won Best of Breed and made the cut in the group. Ginny’s Ethan (FFT Midnight Flamenco Dancer) was Winners Dog and Best of Winners for another point. By default, Jill (FFT She Tsabo Do U Know Jill – littersister to U Don’t Know Jack) was Best Lhasa Apso Puppy. Jill turned 6 months old the day before. This was her first show. After showing Wyatt (who started puppy coat blow big time) three weeks ago and Silly Jillian yesterday, Tammy’s probably ready to shoot me! Jill gaited on her two hind legs, trying to climb Tammy’s leg and ruining her panty hose. Today Tammy is wearing slacks in the ring! Now, my purpose for Jill’s weekend was training, expose her to the sights, sounds and confusion of a dog show. That she kept her tail up is a Victory! in my book. 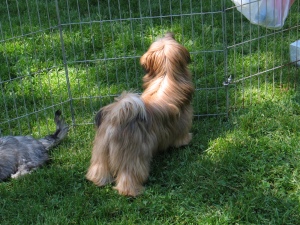 Sorry for this siderail, but I just have to share this. Maybe I’ve become more intolerant as time goes by. Someone came up to Tammy and told her Jill’s trying to climb her legs was a show of dominance. Say what??!!!? Jill is a six-month old puppy at her first dog show! She’s been trained for pieces of the skills required in the show ring, but her puppy brain hasn’t put those together. She doesn’t have the life-experience yet to put these pieces together. Look at her in the above photo. She shows great self-assurance. She self-stacks with confidence. If Tammy had listened to this woman spouting ‘dominance’ and given Jill ‘a lesson in who’s alfpa’…well, at best it be totally inappropriate…at worst, it destroys spirit.

Good luck at today’s show. A repeat of yesterday would be perfect! With perhaps a pinch of Jill keeping four feet on the ground as criteria for her own personal best!

And, then, of course, there’s Champ. I haven’t yet heard from Susan this morning, but late yesterday she sent several encouraging emails about Champ. I would like to share some of her observations. While reading, remember this dog had surgery on Thursday.

…He’s sitting in his usual place at the side of my chair.
I’m feeling better about at least having some more time with him…..

…Gee golly whizz…
Here’s what I mean.   I just finished sending the email to you and I
turned around and looked, and Champ wasn’t in his crate where he’s been
hanging out since he had dinner.  I looked out the front door, and he’s
out there looking for a place to pee (found it) and probably to
poop…..Just like always….

…I’m confuzzled today to report that he is doing so “well”.  My reality
check reminds me that he wasn’t doing poorly at all even when I took him
to the vet and ended up with this possible diagnosis.  I took him
because he “seemed” to be worrying something in his mouth.  Gee, that
and his sneezing after meals, were just things I noticed…not that he
was “ailing”.  Then he started feeling crappy because of the surgery.
Now he is feeling better after the surgery and we will have to see where
he levels out.  I still don’t have a clear pathology.  The first report
came back from the lab saying it was inconclusive….maybe amelanotic
melanoma, maybe squamous cell carcinoma, maybe nothing but
inflammation…..They will look more closely and get back to us again
next week.  Of course there is that little glimmer of hope in me (that I
am denying might be denial)….Maybe, just maybe, everyone who looked at
it was wrong and it will in fact succumb to antibiotics?????   Well,
it’s still a possibility …. at least until the lab finishes and gives
us a more accurate report.

Recently groomed, coiffed in what Susan calls his “best hair cut yet”, she sent these photos and note…

He has the cutest little face and body.
I love seeing all his tiny little features and the twists of his old body. 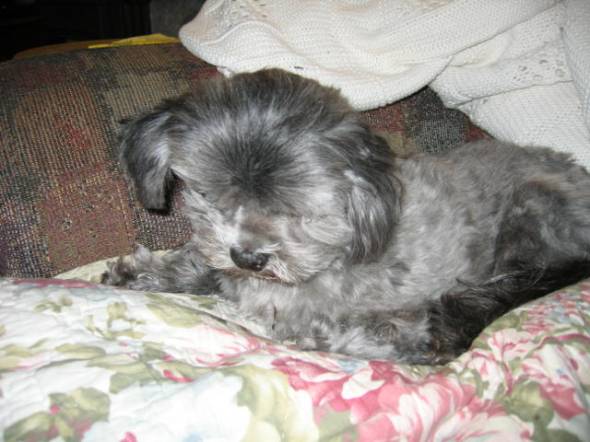 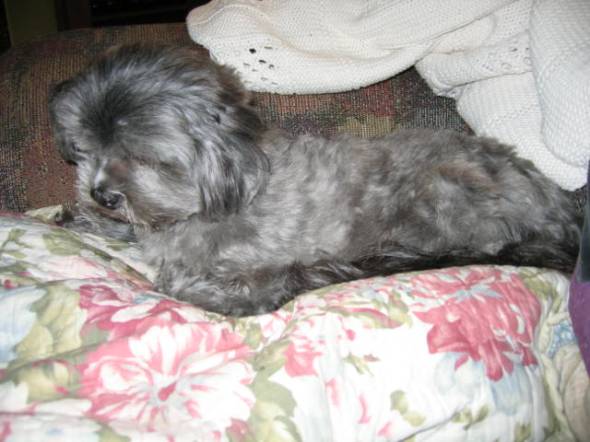