← The weekend’s here..
The AKC Museum of the Dog → 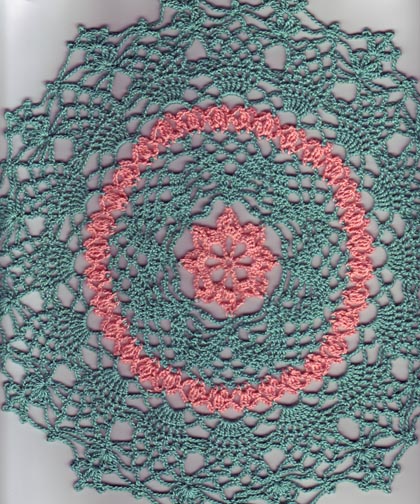 Pauline lives in Michigan and is a fellow breeder/exhibitor. She does handwork to keep her fingers nibble. (Nibble enough to groom all that Apso hair?) Last year she donated several crate mats, offered as trophies, to the Lhasa Apso Club of Central Colorado. They were coral and turquoise, common Tibetan colors. She embroidered the club’s initials on each mat. This year she presented me with this pretty doilie, again in Tibetan colors. The scan doesn’t show the intricate edge, but until I hone my camera skills, it shows the rest of details better than a photo.

I met Pauline several years ago, when in Minnesota attending shows. I have a post, in rough edit, for the blog introducing Pauline, which I’ll post soon.

Pauline, can you send me some photos of your dogs either snail mail or email? Did you figure out how to ‘comment’ on the blog? I may have had something turned off – or on – on the administrative end when you attempted to comment on a Fernando post.

2 Comments on “Pretty, pretty from Pauline”