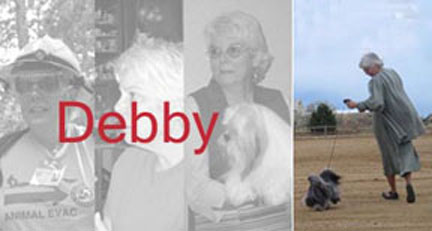 I work with two different gene pools. The FFT – representing Fleetfire Timbers – Lhasa Apsos are AKC registered, successfully compete in the show ring having garnered 90-something Championship titles, and represent nearly 30 years of working with this particular lineage. Intrigued for years by the story of the Gompa Lhasa Apsos bred by Lama Gen Yeshe in Nepal, imported into Canada in the mid eighties by Gerald D’Aoust, I was fortunate to be gifted a group of ten Gompa Lhasa Apsos in August 2001. Kunza is the kennel name I selected for that lineage. Kunza is Tibetan for fire.

To better understand my motivation, I share something I wrote..

Under the full moon, with the wind whipping prayers from the flags outward to the universe, I feel connected to earth, space and time. The connection to something ancient is what motivates me to breed Lhasa Apsos. I do this because of something within me.

I don’t do this as a political statement about the breed. I do not endorse splitting the breed in two. I have never been an advocate for any particular line, pure or otherwise. I have simply bred to the standard, trying to honor that which came from the past.

I favor education: a study of Tibetan history and culture, the breed, the standards, an understanding of how our standards were derived and the political climate in which each was written. I have been given the rare and unique opportunity to relive history, to study the Apso in its ‘original’ authentic state, never having undergone selection typical of western breeding programs. The Gompa dogs have many things to teach, some will lead us to question previous beliefs and understanding of the breed.
November 2002

With my Fleetfire breeding program, I was fortunate to start with foundation dogs that represented breed type. I was equally fortunate not to have changed their characteristics drastically before I understood the importance of breed type. Although my goals have evolved over time, I have always believed it is my responsibility to preserve the Lhasa Apso. I believe it is wrong to change the look of a breed that has been in existence for millennia. In an effort to win at dog shows, particularly beyond the breed level, breeders have selected for traits that enhance the ‘glamour’ of the breed.  Showmanship.  Coat that grows quickly. Size.  Length of neck.  This, in addition to modern grooming techniques, is responsible for the shift of ‘the Lhasa look’.

The eyes of the Lhasa Apso are windows to another place, another time, another culture, other wisdoms. Tibetan culture, incorporating Buddhism into every aspect of daily life, revolved around sentient beings. The Apso’s value came from its existence, not its type or style. Perhaps that is the greatest lesson this special breed has to teach.

My mother purchased her first purebred dog, a Collie named Ginger, the same month I was born. When I was 13, I exhibited Mac, another Collie, in my first dog show. Since then I’ve handled numerous dogs to championships and obedience titles, bred and owned scores of Lhasa Apso Champions. Although my profession is dog grooming, I am a Certified Animal Technician, a Renal Dysplasia scholar and a Master Dog Breeder with a full understanding of line, selective and diversity breeding.

First in Sweepstakes
RoJan Judd for the Defense
circa 1969

In 1978 I started working at “The Plush Poodle” in Aurora, Colorado, a grooming shop owned by Mary Schroeder.

Later I worked as an assistant to all-breed professional handler Max Kerfoot. He showed the Nyima Lhasa Apsos owned by Jeri Berman Schwartz.

Max Kerfoot handling Best in Show Ch. Nyima’s Once a Nites Enuff to a Group One.

My first Champion,  Smooth Fox Terrier
Ch. Foxden Lyric, finishing her title in June 1980.
To this day, I love terriers!

With Ch. Eaton Lily of the Valley
owned by Mary Schroeder

Having a good basic knowledge of caring for coated breeds, there was still much to learn. Judge Edd Biven taught me that trimming the face destroys the expression.  Incorporating his advice, along with advice from others and personal experience, my presentation of the Lhasa Apso became more professional. Here’s Ch. Nyima’s A Little Nachas ROM*; photos taken one year apart.

I became partners with Mary in 1979, forming the longtime working relationship of Fleetfire Lhasa Apsos ROM. During the eighties Mary and I traveled to many states exhibiting the Fleetfire Lhasa Apsos. Mary achieved her Register of Merit status in 1987; I accomplished mine in 1989.

My son, Nate would often accompany us on these trips!

In 1989 I purchased the long established business of Mountain Pet Grooming. Because of my son’s age and my business, in the 90’s I started exhibiting approximately three weekends yearly, focusing on Specialty weekends.